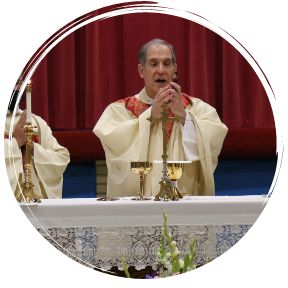 In the last year, three former students of John Petruzzelli have died from drug overdoses in their 30s.

The deaths hit Petruzzelli hard, and he hopes a new faith-based recovery high school where he will be the principal will save Lehigh Valley students from a similar fate.

“It was a tough year,” Petruzzelli said.

As the Lehigh Valley and the rest of the country battle an opioid epidemic, the Allentown Diocese is opening Kolbe Academy in Hanover Township, Northampton County. Starting next month, the school will offer students counseling, support and individualized plans to stay sober.

The school, which recently moved into the former St. Francis Academy, will accept 90-100 students in ninth to 12th grades. All must already have gone through some type of treatment and be sober at least 30 days before enrolling.

A typical school day will start at 8 a.m. with daily check-ins from a teacher to see how students are doing. Students will then take academic classes such as science, history, English and math in classrooms with at least one wall painted purple, the color of recovery. While Kolbe will require students to take a theology class and there will be a chaplain on staff, students do not need to be Catholic to attend.

But what sets Kolbe and other recovery high schools apart from traditional schools is that students will receive counseling one-on-one, with peers and even for families. The school, employing six full-time staff members, will have a part-time certified recovery specialist.

Kolbe Academy, which takes its name from St. Maximilian Kolbe, the patron saint of people with addictions, is not a treatment center, but students will receive individualized plans to help them stay sober. Students also will be randomly drug tested.

“If they relapse, they won’t get kicked out,” Petruzzelli said.

Three days a week, students will have after-school activities such as yoga, hiking or intramural sports. Petruzzelli and Brooke Tesche, chancellor for Catholic education for the Diocese of Allentown, visited recovery high schools in Houston, Philadelphia, New Jersey and Massachusetts that had similar after-school activities to encourage students to have fun sober.

The recovery high school opens as the Lehigh Valley, like most regions in the nation, battles an opioid epidemic. For the first time in five years, drug deaths have dropped across Pennsylvania. Fatal overdoses in the state are down more than 23% in 2018, according to the state’s opioid data dashboard, which compiles prevention, rescue and treatment information, and documents deaths. While the number likely will rise slightly after toxicology reports are completed, 4,267 people in Pennsylvania died from drug overdoses in 2018, nearly 1,300 fewer than the previous year.

Tuition at Kolbe Academy will be $15,000-$16,000. Petruzzelli said the school is looking into offering scholarships and financial aid because it does not want cost to be a hindrance for parents.

Kolbe officials have reached out to school districts in the Lehigh Valley about being an additional resource for students. Bethlehem Area Superintendent Joseph Roy said the district uses the Colonial Academy, run through the Colonial Intermediate Unit, for students with drug and alcohol use, but he sees Kolbe as filling a niche among students and their families.

“I am supportive because Kolbe is a community resource and a choice for parents, at their cost or through a Kolbe scholarship, to help a child in recovery,” Roy said.

Students will be allowed to graduate from Kolbe. Because the school will be small and offer a culture of support, Tesche believes it will remove triggers traditional high schools might have that could lead to students relapsing.

“These are the kids who want to get clean and sober,” Tesche said. “And it’s hard in other schools when there are peers actively using and not interested in stopping.”

“You’ve created a culture of peers who are … trying to change their alcohol and drug use, and trying to stop,” Finch said. “When a kid starts to struggle, people are aware of it.”

The first recovery high school in the country opened in the 1979. Now, 45 operate nationwide. A number of them, Finch said, opened after the Great Recession and during the opioid crisis.

By: The Morning Call